this is a living document <3

Many developers like to believe (or at least act as though) open source is immune from the pitfalls of capitalism. We’ll just write our software, release it under an open license, and keep on our merry way. I mean, if we’re freely giving away our work to anybody who wants it, what could go wrong?

A point at which one stops hearing “I love your project!” and “thank you for your hard work” and starts to hear “what have you done for me lately?” or “is this project abandoned?”

As a project moves from scratching a personal itch to maintenance for others, a shift occurs. No longer is the project driven by your own desires, it’s driven by the desires of others. Working on a pet project is having a hobby, working on a project for others is being an unpaid intern.

Each support request, each feature request, each complaint, is an issue — as a product becomes more popular, the costs of maintenance increase exponentially; and it’s not something that can be solved by pumping more contributors into the system, as there is still operating and organisation costs, and there is always still rent and bills to pay.

This unpaid labor has become expected of the maintainers of popular open source projects, greeted with screens like this each day: 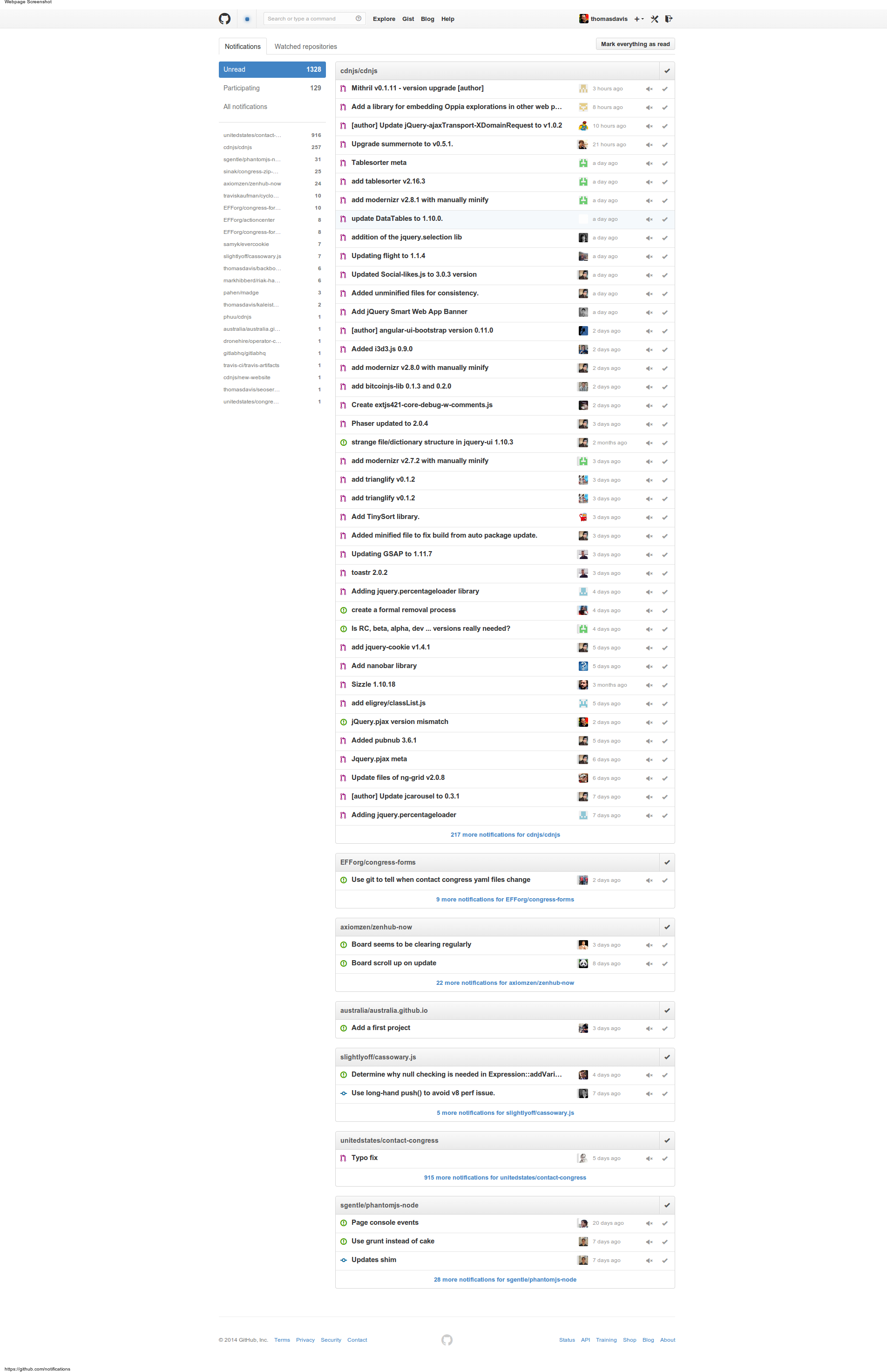 Which just makes us want to explode due to the instant feelings of anxiety, guilt, and shame such screens promote. Which then left untreated, results in burnout.

Now it’s not just me suffering from this, but it seems most open-source maintainers I’ve talked to about it suffer from it to one degree or another. @fat gave a talk about this here, watching it at the time, I was like, I suffered this with History.js, but not with DocPad, so in your face! Turns out, in hindsight, with the current resources available to us, it’s just a matter of time before those feelings catch up with us… and me.

Expecting developers to work with stress and without pay is not a sustainable model. As the open source developer community, we are allowing ourselves to be over-consumed. We need to stand up and assert our power as workers, by participating in better systems of value exchange that change the expectations away from unpaid work, more on that later.

Another major problem faced by open source developers today is our poor competitive ability to capture the value of our work. Instead, a large portion of the value we produce is captured by traditional for-profit companies.

A good example of corporate profit on the backs of open source is MakerBot. Like many for-profits, MakerBot started out as a cool company with a cool product, building open source 3d printers based on the designs of the RepRap project. However, after 3 years of capturing the consumer-level 3d printer market, every new Makerbot model is now closed. By doing so, they undermine the open source movement.

Many people have pointed at MakerBot and said “Yes, [Open Source HardWare] is viable as a business model, look at how successful MakerBot is.” If they close those doors, then it would give people who would say OSHW is not sustainable ammunition for their arguments. It would also discourage new OSHW companies from forming. That is a sad thing indeed.

– @Hoeken, Co-Founder of MakerBot, in “MakerBot vs. Open Source – A Founder Perspective”

This open-then-close pattern is common: many for-profit companies temporarily leverage open source as a competitive advantage in the market.

At MakerBot, we take open source seriously. It’s a way of life for us. We share our design files when we release a project because we know that it’s important for our users to know that a MakerBot is not a black box. With MakerBot, you get not only a machine that makes things for you, but you also get an education into how the machine works and you can truly own it and have access to all the designs that went into it! When people take designs that are open and they close them, they are creating a dead end where people will not be able to understand their machines and they will not be able to develop on them.

In 2014, here’s a bunch of MakerBot’s recent patent applications. Worse, many of these are based on open source designs on MakerBot’s community network: Thingiverse. [0], [1]

Again, open source is a competitive advantage used by for-profit companies. This means the moment open source is no longer an advantage, these systems will become closed source and locked down. Another example: the “open source” Android.

As open source developers, if we aren’t able to capture our value, we open the door for others to control us. By not being in control, the success of our open source work can eventually become at the expense of and detrimental to the commons. We need to take direct action to defend the ownership of our work, lest others profit from our labor. If we do not actively strive to own our value, either through open source consumerism or exploitation, others will own it for us.

Tiberius, of Sensorica, has a vision of Open Value Networks:

To make open source worker ownership a reality, as we must do at least the following:

From the perspective of a worker of an open source project, we can separate three concentric groups surrounding the project.

A project’s friends are the people furthest from the project who simply enjoy the project. They are the users. We love our friends. :)

The members are the people at the core of the project. For software developers, they are the people who have “commit access”. To become a member it is necessary to have continued quality contributions and a decision in favor from existing members.

The critical step that needs to be taken is to consider this core group to be the project’s worker-owners. This means democratic decision-making power and shared ownership of the project’s value creation.

In order to discourage open source consumerism and encourage contributions to the commons, the next step is to adopt commons-based reciprocity licenses.

CBR licenses aim to have the following features:

It’s true, a license with all of these features does not exist yet, but that’s why it’s important to push support for these forms of reciprocity. :)

Value exchange is the void that many open source projects only dip their toes in. It involves producing products, distributing these products, providing paid maintenance for these products, and overall value capture of the project. If we want to own the value of our work, we need systems of value exchange in line with our systems of value creation, using the backbone we have structured in these previous sections.

How? By keeping track of the supply chain from value creation to value consumption, we can directly reward everyone along the chain who created value. The specific details may vary from project to project, from worker-owners to worker-owners, but the general principle of value exchange is the same.

If you are reading this, you’re awesome. <3 I’d really appreciate your thoughts, so if possible: discuss this publicly or contact me privately.