Holons are fractal networks of agents, with some beautiful and powerful properties.

What is a holon

Holons in a multi-agent system are defined as follows:

TODO: need to automate the creation of holon diagrams

A holon is observed by its environment like any other agent. Only at closer inspection may it turn out that a holon is constructred from a set of agents, which may also consist of subholons. As any head of a holon has a unique identification, it is possible to communicate with each holon by sending messages to their addresses. As long as subholons intend to keep their commitments and as long as subholons do not make conflicting commitments, cycles in holon memberships are possible.

• A task holon is a holon that is generated to perform only a single task.
This notion is opposed to organisational holons, which are designed
to perform a series of jobs.
• Delegation of tasks between two subholons h1 and h2 of a holon h as
part of working towards the goal of h is called intra-holon delegation.
If two holons delegate tasks and this collaboration is not part of the
goal of an encompassing holon, this is called inter-holon delegation.
• A holon that is composed of subholons with identical ability types is
called a homogeneous holon. If abilities are different, the holon is
called a heterogeneous holon.
• Furthermore, we distinguish active and passive holons. An active
holon is a holon that has already been created, that has bound its
subholons by commitment to the holonic structure, and that has not
yet been terminated. Once it has been terminated and when it exists
only in the memory of the population, the structure is called a passive
holon.
• Active holons are divided into manifest and latent holons. If the sub-
holons committed to participate in the holon, and are committed to
dedicate, or actually have dedicated resources to it, or are performing
actions specifically in pursuit of the holons goals, the holon is called
manifest. If the holon is not terminated and is not currently influ-
encing a subholon’s actions, it is called latent. In contrast to passive
holons, latent holons can be activated instantaneously as there is still
a commitment of the subholons to participate in the holon in princi-
ple.
• Finally, a holon that is not atomic is called a holarchy. A holarchy
of which all nested subholons have only a single head holon, i.e. a
holarchy with a tree-like structure, is called a hierarchical holarchy.
The advantages of the holonic concept are threefold. First, this technology
preserves compatibility to multiagent systems by addressing every holon
as an agent, whether this agent represents a set of agents or not, is encap-
sulated. Second, as every agent may or may not represent a larger holon,
holonic multiagent systems are a way of introducing recursion to the mod-
elling of multiagent systems, which has proven to be a powerful mecha-
nism in software design to deal with complexity. Third, the concept does
not restrict us to a specified type of association between the agents, so it
leaves room to introduce organisational concepts at this point. To depict a
system of holons, we choose to define a novel type of diagram called holon
diagram. A holon diagram is similar to a Venn diagram in that it highlights
122 6. FORM - A Framework for Multiagent Organisation and Agent Autonomy
the relationships between the sets of subholons, but it also includes some
annotations that clarify names, resources and holon goals. 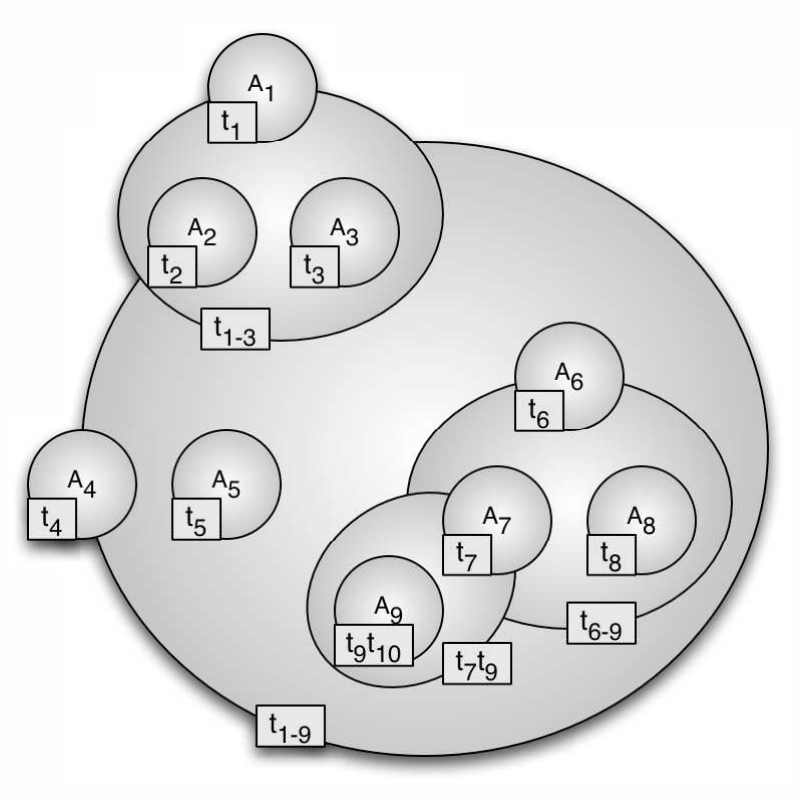